Hope everyone has had a wonderful holiday and a beautiful 2014!  We are blessed to be welcoming two babies into this world in February 2015!  We are so excited for the coming year!  I will be posting photos of the nursery shortly but til then here was our living room decked out for Christmas... 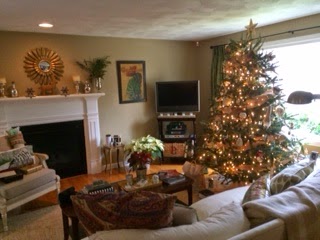 Posted by Stefania @ ouryellowlovenest at 8:02 PM No comments:

Sorry for the Abandonment - RH Cabinet

I have abandoned my blog for a good six months! So sorry.  I have not abandoned my house though.  There are a few new furniture pieces, newly painted rooms and outdoor updates.  Today, I wanted to show you my 30th birthday gift from my husbo.  Some girls ask for jewelry, I ask for furniture.  Meet my first piece from Restoration Hardware. 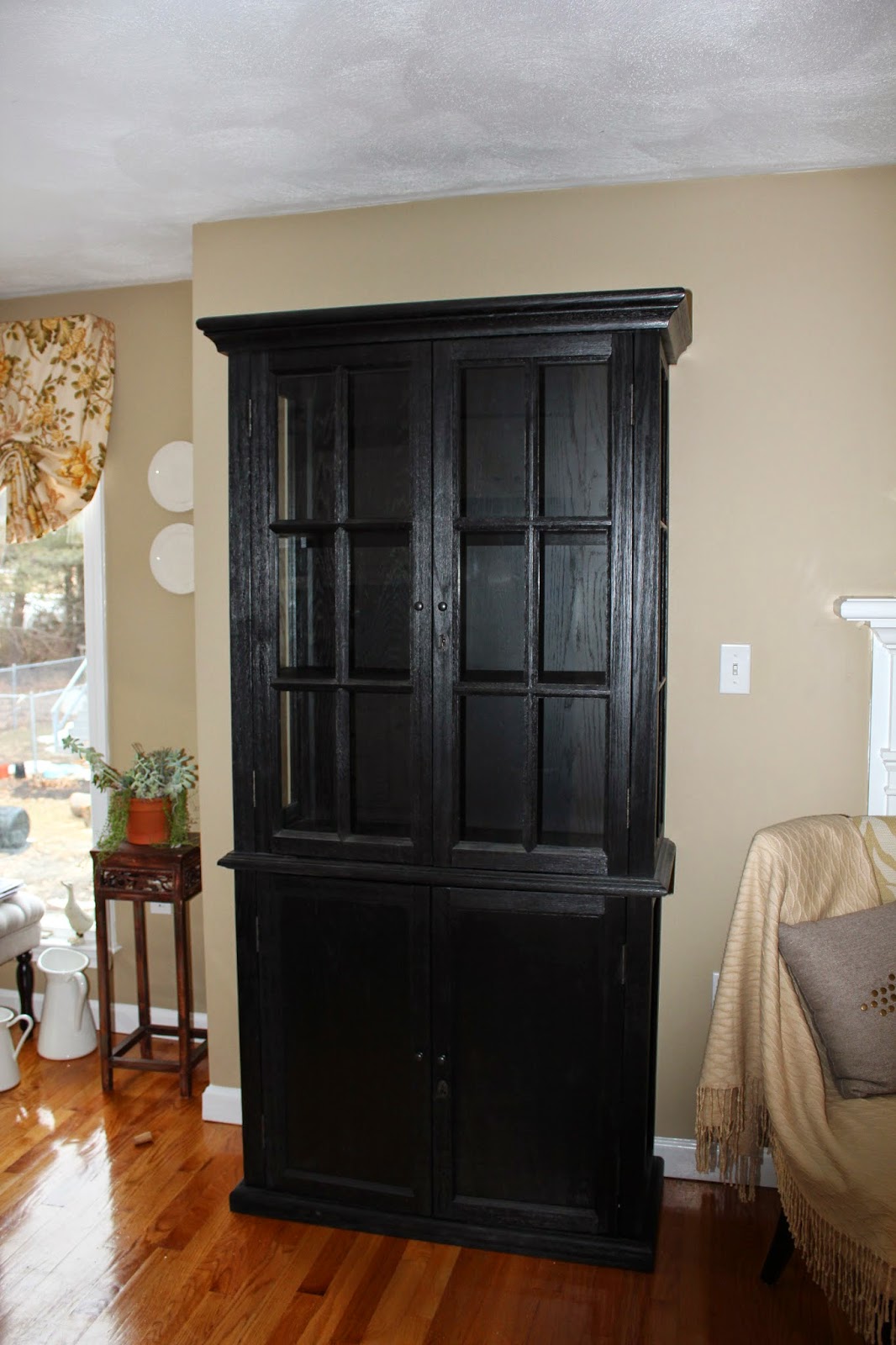 It's the French Casement Sideboard.  It sits between the kitchen dining area and our living room.   Here's the spot before the piece was delivered.  We did have a small console there before that we moved to the basement. 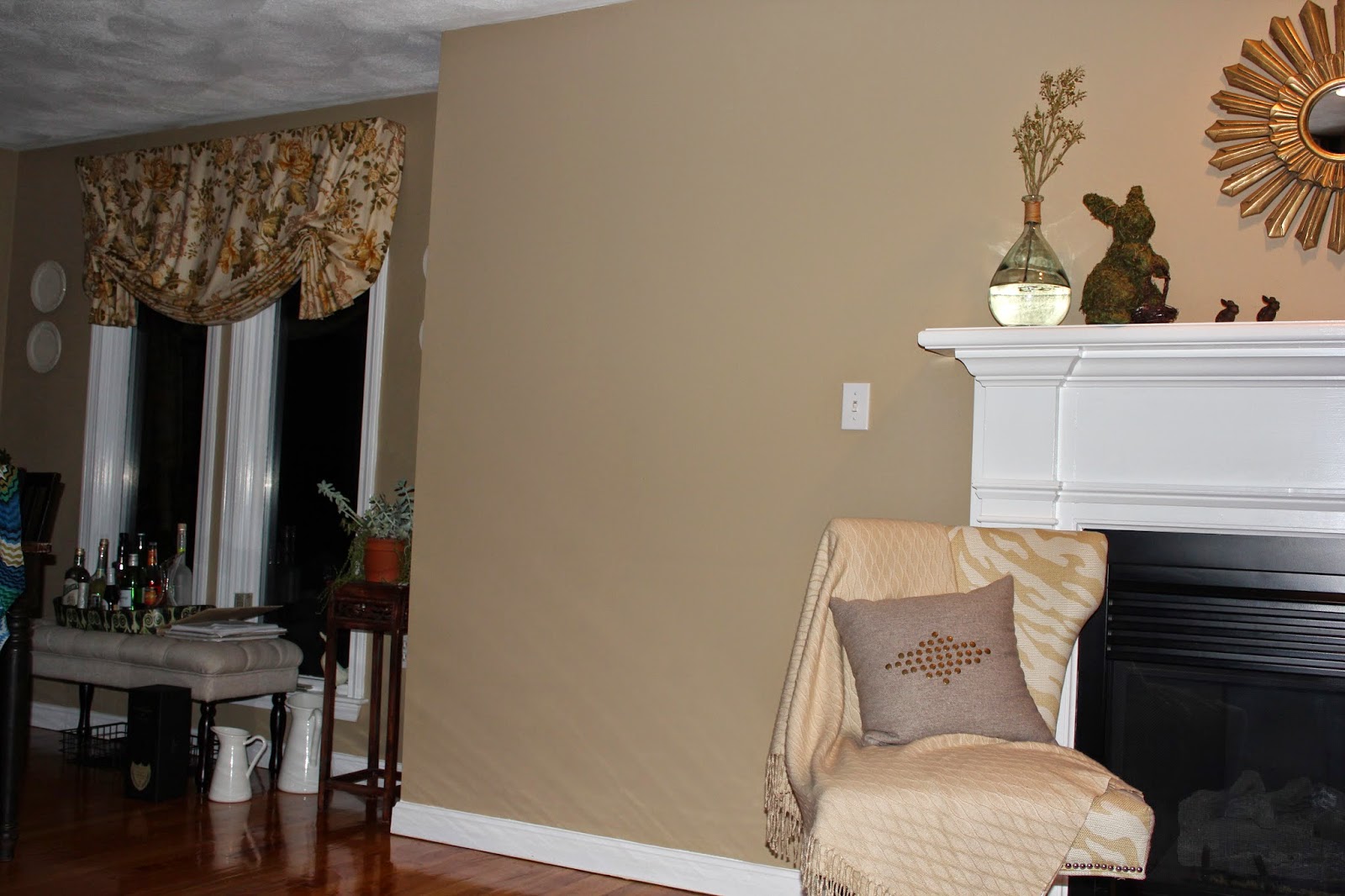 I chose the black finish so that all my white dishes would pop. It was too much fun to style it, must have switched things around at least 10 times by now.  The white pitchers on the top left corner were the only things I bought for the cabinet.  (They're from Ikea.)  Otherwise, I had everything already. 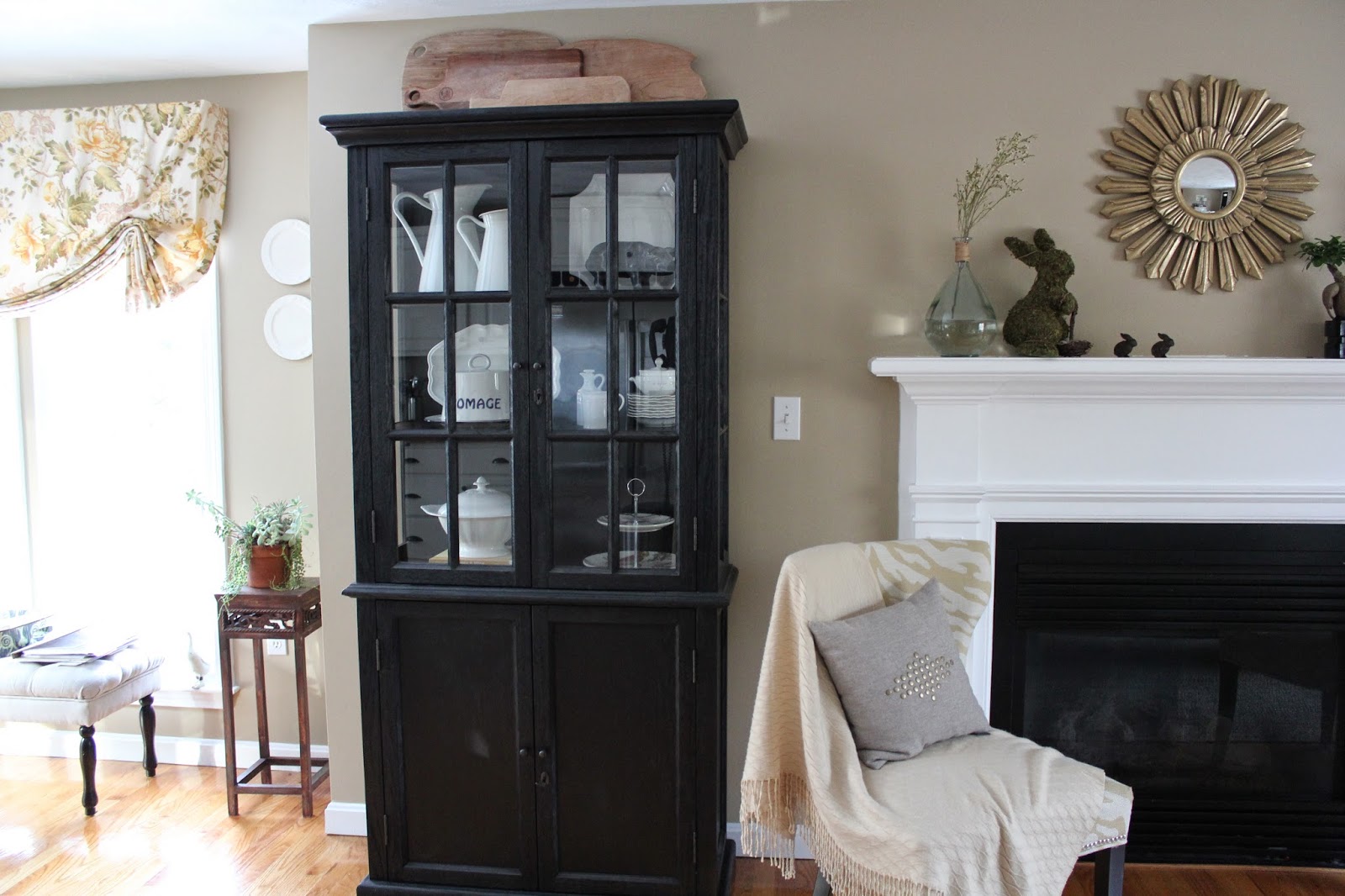 We really needed this extra storage in the kitchen to hold all our serving ware and to use as a liquor cabinet on the bottom.  Formally, these platters were scattered in different kitchen cabinets or stuffed in drawers in a chest in the living room.  It's so nice to have everything on display and easily accessible. 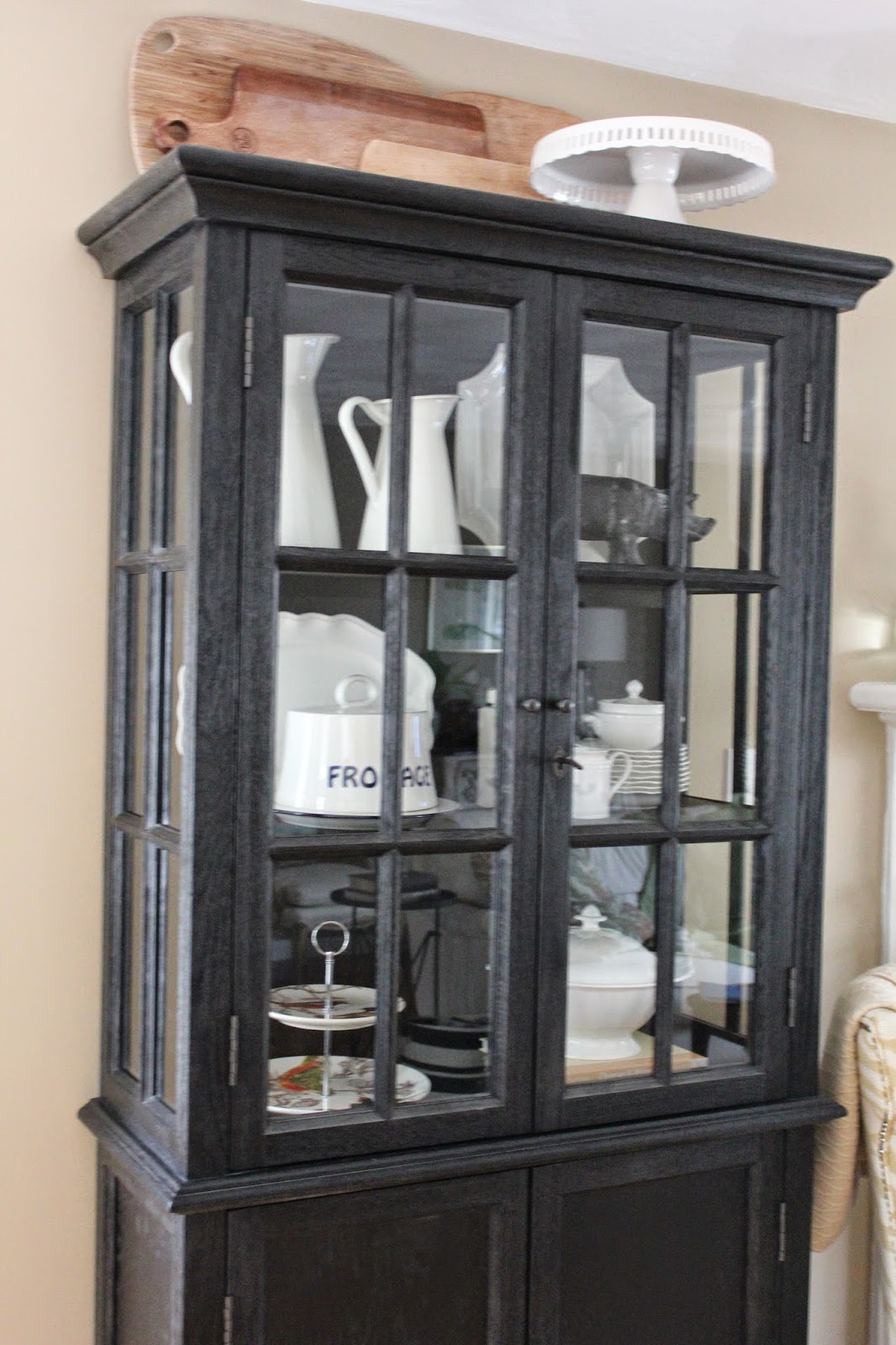 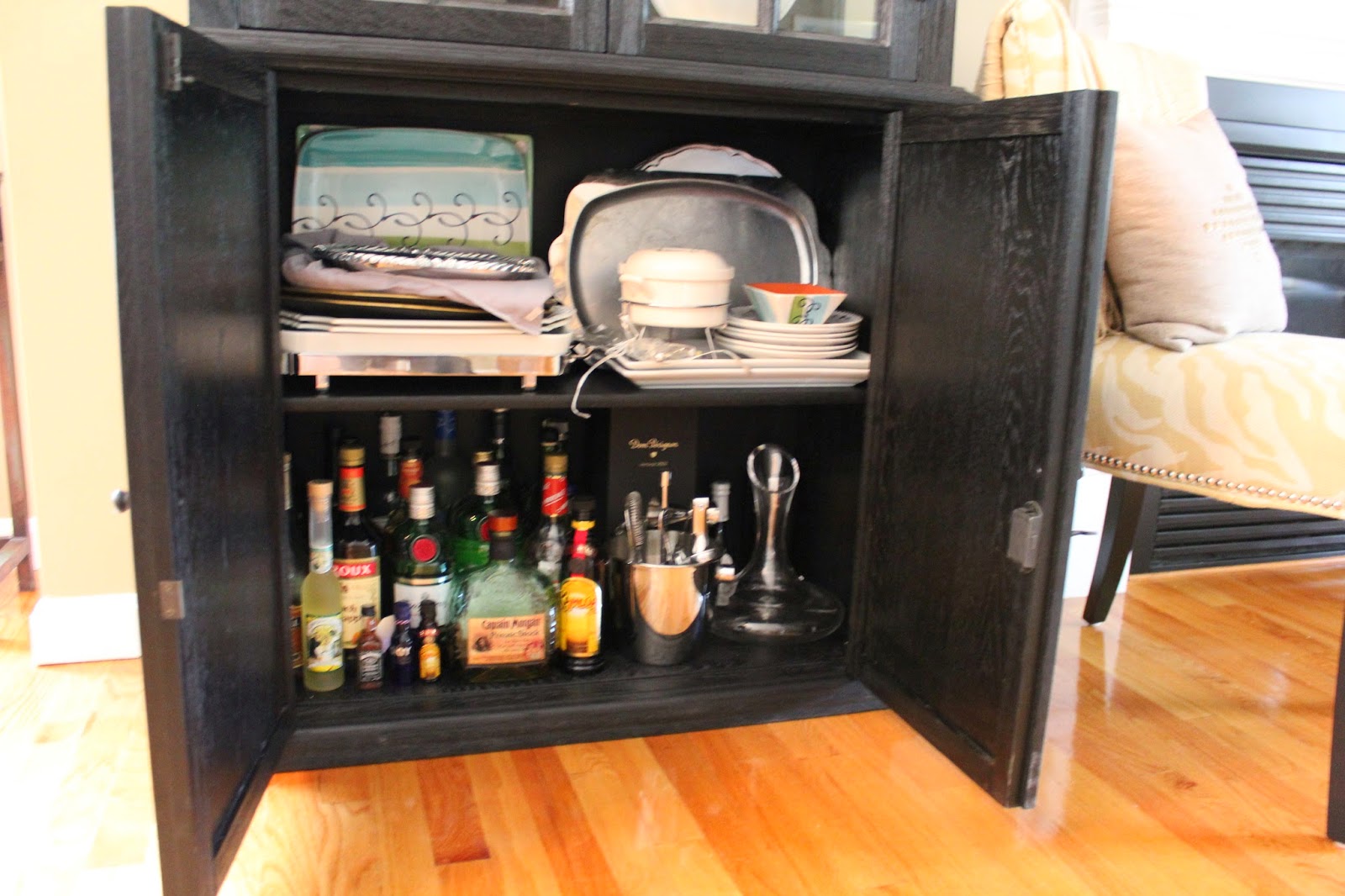 The side panels are also glass so even though it is a large piece, it doesn't feel heavy in the room which I was scared about. So far, I am extremely happy with this piece and would definitely order from Restoration Hardware again, if the budget allows!

Thinking of those affected by the Marathon bombings last year.  Boston Strong

Posted by Stefania @ ouryellowlovenest at 11:32 AM No comments:

Fall's Here and I'm Back!

Wow, I guess I took the summer off from blogging!  Didn't mean to do that but I must have been having too much fun with weddings, bachelorette parties and trips to the Cape.  It was a wonderful summer!

Now that New England has turned to fall (well it was 80 degrees today), I'd like to give the inside of my home some attention again.  As soon as tiny white pumpkins hit the grocery stores, I bought a lot of them and started thinking about fall decor.  I like putting a bunch of them in glass containers, like this. 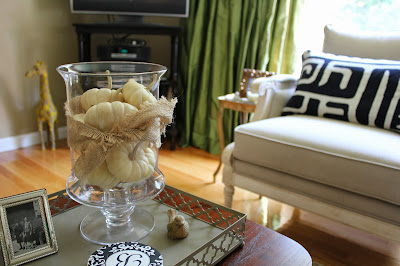 I love the burlap ribbon around it.  I also put a bunch in a glass lamp but those got moldy.  I don't think pumpkins should be in a closed container.  Lesson learned.
I brought out some of my fake pumpkins too, but haven't brought any Halloween stuff out yet.  Now that it's October though, I guess I should get on that. 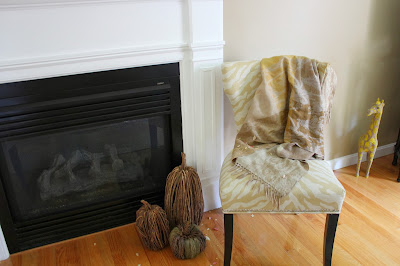 Leaves are falling all around the pumpkins from the branch above, which is kind of cool but a bit messy. 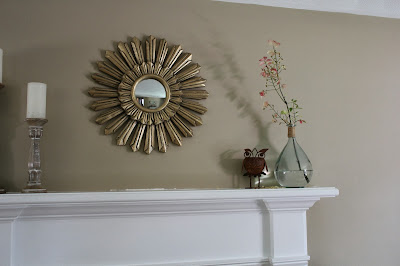 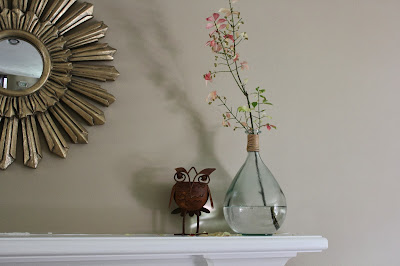 I did some decorating outside the house as well, some mums and pumpkins on the stairs.  I'd rather stick with the potted mums than plant them since they will die in a few weeks.  The wreath is from HomeGoods. 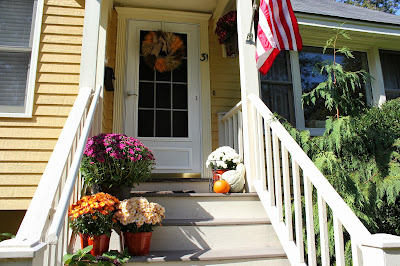 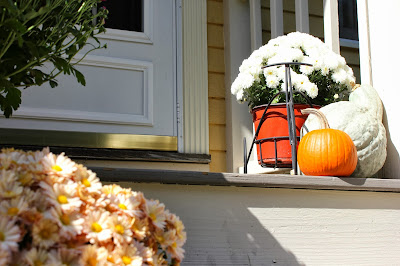 I want to hug that weird looking gray gourd!  (It's from Whole Foods.)  Are you guys decorating for fall?
Happy Pumpkin Season!﻿
﻿
﻿
﻿
Posted by Stefania @ ouryellowlovenest at 5:52 PM 1 comment:

Ready for a Patio Party

Wow, it's been a while!  I guess it's been a great start to the summer. I've already been on a few weekend getaways and am so excited for the rest of my trips and some of my best friends' weddings! Today I wanted to share our little patio edition that got completed this spring by my husband and our good friend Tom.

This was the space about a year ago.  All marked out for the patio. 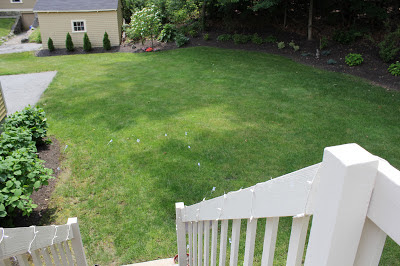 And here are some mid-project pictures. 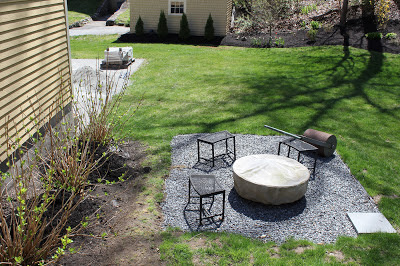 Then the two cuties responsible for the patio, very serious about their work.  Tom works for Sculptured Earth so he has layed many patios, most probably 20 times the size of this one. 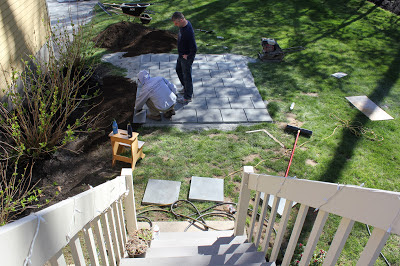 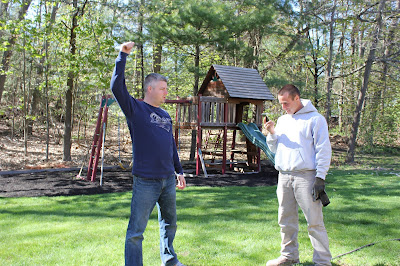 Now for the lovely afters, with all the landscaping completed around it as well. 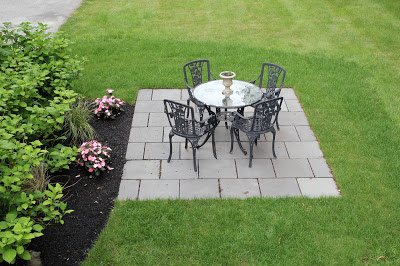 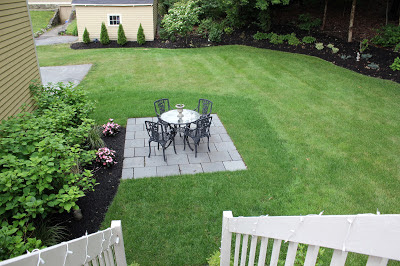 We extended the mulch bed out to meet the patio, so I added some ornamental grasses and annuals to fill in the empty space.﻿ 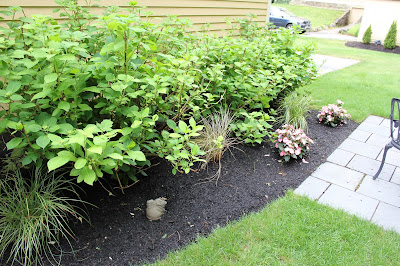 We are trying to get moss to grow in between the pavers because I love that look.  And we will also be adding a pathway using the same pavers to get to the patio..... A huge THANK YOU to Tom and my hubby for their hard work! I love this space and can't wait to have friends over around a firepit!
﻿
﻿
﻿ 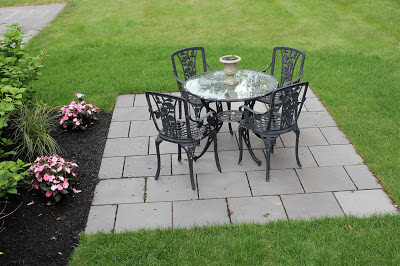 Stefania @ ouryellowlovenest
My name is Stefania and in 2009 my husband and I bought our first house. Since then I have become officially obsessed with all things home.